The Cathedral has a ring of twelve bells hung for Change Ringing, located in the Norman Tower. The band practice every Thursday evening, starting at 1930.  They ring regularly before Sunday Morning services, as well as ringing quarter peals before evensong a couple of times a month.

For centuries church bells have sounded, calling people to worship, in celebration of special occasions, in remembrance and to mark special events. In the very early days, the bells were “chimed” to make a sound but the ringers had little control over the order in which the bells sounded and therefore the “music” they played.

The origins of what we call change ringing lie in the sixteenth century when church bells began to be hung with a full wheel enabling the bell to swing in a full circle and back again. This gave ringers control of their bell, which allowed sets of bells (rings) to be rung in a continuously changing pattern. Music is created by moving bells up and down the ringing order to a defined sequence known as a method. Check out an example of a method here.

Bellringing is a team activity that stimulates the brain and helps keep you fit… it also makes a glorious sound! Many consider ringing to be their contribution to church life, others do it for the pure pleasure it brings. 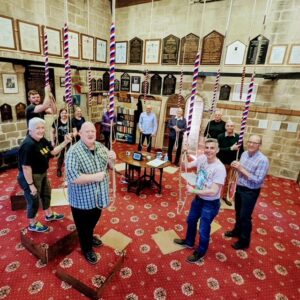 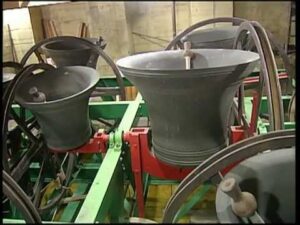 The cathedral bells include an original ring of ten cast by Thomas Osborn of Downham Market in 1785, and the bell frame of this date is preserved in the Norman Tower above the modern frame.

By the 1840s, the tower was severely cracked and demolition was proposed, but fortunately public subscription was raised to save it. The architect for the restoration of 1846-7 was L.S. Cottingham, who worked on many such projects. Houses had been built next to the tower, but they were removed at this time. Historical prints also show that it also had, at different times, a clock, cupola and a sun dial.

The bells were rehung in a cast iron frame and retuned by Taylors of Loughborough in 1977, the tenor weighing 27-2-5 in C# after restoration.   A roof lantern was installed at this date, and the belfry windows blocked. The area around the base of the tower was also excavated to 12th century level – the depth is due to centuries of occupation and also deliberate build-up at various times to try to alleviate flooding.

The Very Revd Neil Collings, who served as Dean 2006-9, had a vision to augment the bells to a 12, as befitting a cathedral, and this became a reality in 2012. A thirteenth bell, a flat sixth, was added in his memory in 2013.