This Christmas, join us at St Edmundsbury Cathedral and find some Inspiring Angels!

The word angel means ‘messenger’. In the Bible, angels bring all sorts of messages. Probably the best known angels are the ones linked to the Christmas story. An angel tells Mary that she is to have a baby and angels tell the shepherds that the baby has been born. Many of our favourite Christmas carols mention angels, such as ‘Hark the Herald Angel sings’,

The early Christian church believed that there are 3 types of angel: Seraphim, Cherubim and angels. Two archangels are named in the Bible: Michael and Gabriel. Over the centuries artistic images of angels have usually included wings with dazzling white clothing. Later ‘cherubs’ – small, winged childlike figures – became popular on statues and in art.

Angels are a symbol of love, and are often thought of as protectors and guides. 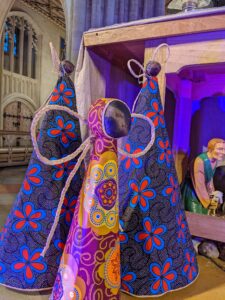 How can you join in?

This Christmas, the Cathedral is bursting with angels for you to find.

Where else can you find angels?

Other churches in the area have angels too! Visit St John’s Church in Bury St Edmunds (St John’s Street, IP33 1SP, look for the tall spire) to discover a wealth of angels in carvings and stained glass. Download more here. The church is open from 8.00 am to 6.00 pm Monday – Saturday, 9.00 am to 6.00 pm on Sundays.

Holy Innocents Church, Great Barton (Church Road, Great Barton, IP31 2QS) is taking part in Inspiring Angels. Make a visit and enter a competition to name Holy Innocents’ “Lonely Angel” (the one angel in the rafters that still has a head – the others were sawn off during the Reformation!). Open daily, 10.00 am – 4.00 pm.

St Mary’s Church on Honey Hill has the largest number of carved and stained glass angels in the diocese. You can also visit their 8ft Angel Gabriel! Find out more here. St Mary’s Church will be open Sundays 2-4pm and Monday to Saturday 10.30 am – 3.00 pm.